CHICAGO — Chicago Power Exchange (formerly the D/s Roundtables discussion group) is excited to announce our next meeting and new schedule!

But wait! What is Chicago Power Exchange? It is a discussion and social group for everyone 18 and over who is involved in, exploring, or curious about power exchange relationships. This includes M/s, D/s, Sir/ boy, and Trainer relationships, as well as relationships that defy labels but incorporate consensual power exchange. Attendees do not need to be actively in a relationship to attend, and all levels of experience (including none!) are welcomed.

SPRINGFIELD — The Illinois House Human Services Committee on Tuesday voted through a bill that would make it easier for trans people in the state to change the gender on their birth certificate.

The committee also held back a bill that would have required trans students to use restrooms for the gender of their birth.

Equality Illinois said the bill, HB 6073, modernizes the standard in Illinois for an individual to correct the gender marker on their birth certificate. This is important to trans Illinoisans because they may face embarrassment, discrimination, and harassment if their core identification documents do not reflect their authentic gender identity. 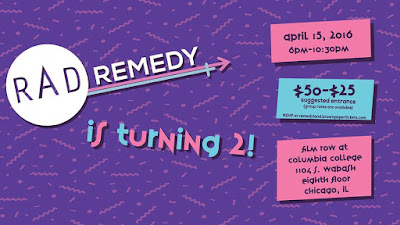 CHICAGO — After a long week (and perhaps a day of tax prep), come re-live your childhood at Remedyland – a carnival of the games you grew up with – Hungry Hungry Hippos, Chutes and Ladders, and Don’t Break the Ice just to name a few. We’ll also have a silent auction filled with heaps and heaps of cool things!

Through the generous donation of an anonymous benefactor, everything we raise will be matched up to $2,000 so please engage in copious bidding wars on our behalf.

Food and drinks will be provided!

All funds will go to support RAD Remedy’s mission of connecting trans, gender non-conforming, intersex, and queerfolks to accurate, safe, respectful, and comprehensive care in order to improve individual and community health. To find out more about RAD Remedy and our current projects, check us out at www.radremedy.org

The event is wheelchair accessible (using main door of the building) and open to all ages. A note for those consuming our libations: please be 21 or older with ID and please drink responsibly.

Touché to host Bear All, April 23

CHICAGO — Touche will host a list of bear musicians with their Bear All event on April 23 in Chicago. Comedian Bryan Dowling will be the host with The Pleasure Centers, Mister E Machine, Ben Walter, and Scott Free performing.

CHICAGO — Justin Hartman, aka Pup Tork, announced last week that he would be stepping down as secretary of the Chicago Puppy Patrol, one of the most active clubs in the city and one of the country’s biggest pup groups.

Tork made the announcement in an open letter to the CPP’s Facebook group last week. He stated that his commitments, which include being a board member of the International Puppy and Trainer Contest, a director for the Illinois Pup and Trainer contest, plus membership in the Windy City Boys Troop, just didn’t allow him to give his position in the CPP the attention it deserved.

This summary is not available. Please click here to view the post.
Read more »
Posted by CNS at 3:23 PM No comments:

CHICAGO — After years without a local bear contest, the first Mr. Illinois Bear and Illinois Bear Cub contests will be at Jackhammer on April 15.

Contest organizer Scott Turner, himself a former International Bear, said he started organizing the contest because there was no state or local bear contest anymore. The contest will also be a fundraiser for co-sponsor the Imperial Windy City Court’s charities (Autism Speaks and Vital Bridges) plus the court’s scholarship fund.

The winners will get medallions and patches, along with gift certificates from bear themed t-shirt vendors, gift cards from various local bars, Bear Skin undergear, $50 each from Jackhammer and adult DVDs with more prizes being added in the run-up to the contest.

The judges for the first contest are:
Three local bears have already signed up to compete and Scott said the community response has been very good.

“We anticipate a good turnout for this event,” he said. “Being its first year and fairly quickly organized, we hope to grow it more in the coming years.”

April 2016 Workshops and Events at Early to Bed

This summary is not available. Please click here to view the post.
Read more »
Posted by CNS at 2:22 PM No comments:

CHICAGO — International Mr. Leather announced the emcees for the 2016 contest through their Facebook page today. The emcees will be Thib Guichard-Callin and Lenny Broberg.

IML management said this in their announcement:

Lenny Broberg, IML 1992 will be lending his smoky voice and infectious snark once again! Joining him this year will be French Native, Thib Guicherd-Callin! Currently a resident of San Jose, California, Thib earned 1st Runner-Up at International Mr Leather 2013.

"We are delighted that they will be co-hosting the ceremonies throughout the weekend, creating a fun-filled, sexy atmosphere that will be most enjoyable to all in attendance!," said IML Executive Producer, Chuck Renslow.

IML will be at the Congress Hotel May 27 through 20.

SPRINGFIELD — Getting a little bit of a head start here, Easter is past (well passed as of tomorrow), spring is in full swing. Let get out of the gloom of winter and come out to CCRB at La Feista on April 9, Saturday, from 2 until 5. Our discussions sometimes get loud, but so far we have not been kicked out of the restaurant, not that we are trying. We have a great manager there as well as serving help.

This months discussion will follow on the same thread as have been doing. A general topic, (no I haven't decided yet) as well as the cards with words, phrases and such that help in leading the discussion n different ways.

Everyone so far has enjoyed them, or at least that is what they tell me, lol... (probably don't want to hurt my feelings).

Come enjoy a Saturday afternoon of fun. It will probably be raining so come out and see us.

DECATUR — Howdy gang! We survived our trip on the big boat and didn't end up visiting Gilligan's Island.

Firstly, I'd like to say a big thank you to our Kitten for getting the post put up last week for us. Secondly, I want to invite everyone to come on down and join us for Winery Wednesday! Time for those wonderful burgers and phillies, nice cold beverages, and lots of laughs.

The Winery is located on the corner of W. Main and Oakland in good ol' Decatur. The dress code is your usual vanilla bar wear. Be sure to bring your cold, hard cash as the Winery doesn't accept plastic or checks. There is an ATM on site if you should need it. The fun starts around 6 and goes til the last person quits.

Looking forward to seeing everyone who is able to make it out.

Panelists include: Dale Lazarov; Nikki Patin; Philip Dawkins; and others. (See bios below.)

Tickets: $12 general admission, $5 for museum members and students with valid ID. Event is 21+ only, and admission includes two drink tickets.

CHICAGO - Last Tat-Tuesday of the month is GEAR and we celebrate scent with our infamous ArmPit Contest. This month, the brutally hot, TODD HARRIS (Chicago Mr Leather 2016) is our celebrity guest judge... WOOOOOOF!

SAN JOSE - The National Coalition for Sexual Freedom's annual Coalition Partner Meeting took place March 4-6, 2016, in San Jose, CA. For the first time, the annual meeting was made accessible by video conferencing for Coalition Partners and NCSF staff members, so they could actively participate in the meeting.

CHICAGO - We had another great turnout for March's social. Nearly 75 people, with LOTS of newcomers, and of course our friendly staff and many members to welcome them.
Thank you to everyone for bringing your kinky selves and your delightful kink-filled energy to GD2!
We look forward to a big turnout for April's social!

Do you want to meet other kinky, sex positive people but aren't sure where to start?
Are you curious about what a sex positive BDSM/kink club is like but nervous about attending one while it is in full swing?

The new titleholders are:

The winners will go on to represent Illinois at the Great Lakes Leather Weekend in Indianapolis.

The contest also had a very successful weekend in fundraising, with more than $2,700 being raised for the travel fund.

Idealism, pragmatism and making a choice

When Bill Clinton was first elected President, I was 18 and a freshman in college. I was idealistic then. At 18, you should be. I remember feeling like we had created a new world. That anything was possible.

In the next presidential election, I will be 42. Solidly middle-aged. I'm not (too) idealistic anymore. Ironically enough, that means I'm voting for a Clinton again. And it has me torn.

Even though I've become much more pragmatic, I actually like Bernie Sanders. I like a lot of his policies. I agree with a lot of his economic arguments. I like he wears his opinion on his sleeve and is an honest-to-God liberal. And I don't like the idea of having the Oval Office switching between a couple of families. He does connect with the idealism I still hold on to.

But as I've grown older, I've learned that idealism doesn't always work in the real world. We absolutely need it. It drives us. It helps us dream of what could be. It gives us a goal. But idealism does not do negotiation or compromise well. It can't. It thrives by taking a stand and fighting for it.

Reality, sadly, tends to beat idealism up. We want perfection, but perfection doesn't actually exist. To move forward at all, there has to be some give. We can't always get everything we want. We have to focus on what we need.

URBANA, Illinois - It's starting to get warm out there! Come celebrate the beginning of spring and send off the snow with some of our local kinksters! It's going to be another great night with many old and new friends.

Keep in mind that this month we are back to our normal set up. It will NOT be a private event this month, so please keep that in mind when choosing what to wear. I know you'll all look fantastic no matter what you choose! However, since it will not be private this month, there will be vanilla patrons sharing the bar with us.

February's social was a blast! To the 50+ newcomers, it was a pleasure to see your energy and enthusiasm. All of us at GD2 look forward to seeing more of you!
And a big thank you to the 30+ GD2 members, and of course our staff, for being so welcoming and being your usual fabulous selves.
If you haven't been to GD2 before or haven't been in a while, we hope to see you at next month's social!