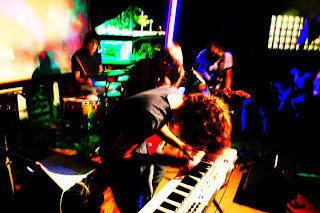 Local Illinois band Shy Guy Says sat down to answer a 10 questions about their band. Here is what the members RJ, David and Jeremy had to say.

WCB: How did everyone in the band meet?
RJ: I have no idea
David: Me, Jeremy and Marc have known each other pretty much since grade school but we didn’t consider being in a band together until our early years of high school. RJ is Jeremy’s brother so he kind of just was around and he expressed having similar musical interests.
Jeremy: We all grew up within a couple blocks of each other. I introduced RJ to the rest of the guys when we went to see Serj Tankian at the Vic in ’07.

WCB: What bands are you currently listening to?
RJ: Four Tet, Saul Williams, Flying Lotus
David: As of right now I’ve been listening to Native, Russian Circles, True Widow, and a band called Gospel who quite possibly have the most insane drummer in all of existence… sorry Marc.
Jeremy: Lately I’ve been into Sonic Youth, Bibio, Animal Collective, Talk Talk


WCB: Where do you find inspiration for new songs?
RJ: There's never one 'good answer' to that question.  A lot of  things.  It's never really big moments of inspiration - lots of work, trial and error.  we toss out a lot of half-made songs that we don't
see going anywhere, pick them back up, rework them.
David: It’s a natural process for me. I don’t search for inspiration or tell myself I’m going to try to write a song. A song usually comes out of when I’m practicing or just messing around with guitar or
effects. I guess the inspiration comes from either learning something new technically or experimenting.
Jeremy: What they said.


WCB: What do you guys do in your spare time?
RJ: Computers + music
David: We like to eat yummy food, go to shows to see other bands play and drive around aimlessly until something seems interesting.

WCB: How did you come up with your band name?
RJ: It's a mario party mini game. One of the many things we've been meaning to change...
David: T'was from a video game.
Jeremy: I don’t think we’ve been meaning to change it. Sure, we’ve received our share of criticism for it… and it’s pretty tough to explain to baby boomers. But I like the fact that we throw people off guard. When you hear us introduce ourselves as “shy guy says” you don’t expect fuzzy post-rock to follow.


WCB: How much time do you spend practicing?
RJ:  Not enough.  Jeremy and I are in urbana, Marc and Hubbell are in Elmhurst. Plus, I'm gone for the summers.
David: As much as we can without jeopardizing our jobs or college degrees.


WCB: When did you start playing live shows?
RJ: Jeremy, Marc and Hubbell were in a band when they were in middle school? Shy Guy Says started playing shows almost 4 years ago.
David: In our freshmen year of high school. It mostly comprised of basement shows.
Jeremy: Around ‘06/’07 we used to play shows for bookers in the suburbs with our old bands. They were adults who rented spaces and found bands on Myspace to play. I guess it was the same scene that gave rise to bands like Fall Out Boy, The Academy Is and Plain White T’s. You can imagine how well we fit in…. It was artistically draining. The promoters wouldn’t even listen to our music, they just looked at how many page views we had on Myspace and gave us an expected draw to fill. Their business model was ripping off kids. We had to get all our friends to come out and pay seven or eight dollars to stand and suffer through numerous “scene” bands that looked like they came right out of yourscenesucks.com. It was pretty miserable. By the time we hit high school we got together with some other bands and starting putting on shows in basements. It was much more fulfilling. I guess that was when we really “found ourselves” as a band.


WCB: Where was the first venue you played?
RJ: High school amnesty concert 2008, maybe. Next was a basement show.
David: I think it was in a man named Gamefuel’s garage.
Jeremy: Haha, there’s a lot of different answers to this because the four of us played as a different band  – idiocracy – before we were shy guy says. Also, our first gig as “shy guy says” had a different bassist because we couldn’t drag RJ home from college. So it was likely some garage during the Fall of 2008.

WCB: Where do you see yourselves in the next 5 years musically speaking?

RJ: Ask again in 4 years and 364 days. But really, that's a tough question. We've got a lot of decisions to make the next year or so.
David: Still making music, hopefully another album or two. I wish I could tell the future.
Jeremy: Definitely going to record again. We’ll take it from there. Our lives are pretty interconnected, so I don’t see us parting any time soon.


WCB: What is something that would be interesting to know about Shy Guy Says?
RJ: We like Arizona iced tea.
David: We used to play industrial doom metal. I also used to have too many guitar pedals.
Posted by Megan Purazrang at 10:21 AM