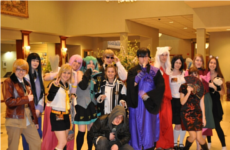 Anime Midwest 2012, one of the largest up-and-coming anime conventions to happen in the Chicagoland region, is tremendously exuberant to announce the appearance of three cast members from the new FUNimation Panty and Stocking dub will be appearing at the Anime Midwest 2012 convention. Voice actors Jamie Marchi (Panty), Ian Sinclair (Chuck), and Joel McDonald (Brief), will join Anime Midwest 2012 in Lisle, Illinois this July for three days of autograph sessions, discussion panels, screenings, and more.

Ian Sinclair will be Chuck in Panty and Stocking. Ian got his first voice work when he visited Funimation Studios as a college student in 2004, and a director asked him if he'd like to jump in the booth for a one-liner. Unbeknownst to that poor director, that insignificant character ended up being an extremely small, yet still recurring, role, and Ian had to be called back in.

As a native of Dallas, Ian graduated from TCU with a degree in Theatre, returned home, and began his career as a stage actor where he won awards such as Best Local Actor in Dallas of 2009. He continued at Funimation, gradually working his way up from one line characters until his break as Dallas Genoard in Baccano!, a show which he Assistant Directed. Since then he has performed in roles such as Toraji Ishida in Bamboo Blade, Douglas Rosenberg in El Cazador de la Bruja, Sobi Nakajima in Linebarrels of Iron, Haruki in Master of Martial Arts, Akoz in Casshern Sins, Kaoru Seo in Sekirei, Shinze Kamiu in Shikabane Hime, Liam in Fullmetal Alchemist: Brotherhood, Ginei Morioka in Rosario + Vampire , Marc Cole in Spice and Wolf II, Toyama in Oh! Edo Rocket, Bora in Fairy Tail, Romano in Hetalia, Shu Koibuchi in Princess Jellyfish, Tatsumi in Shiki, Bardroy in Kuroshitsuji (Black Butler), and most recently Ryner Lute in Legend of the Legendary Heroes.

As a director, Ian has worked on Initial D, Spice and Wolf II, both seasons of Black Butler, and a few others he can’t talk about… yet. Additionally, Ian can be heard in numerous radio/TV spots, as the voice of Baron Flynt in the video game Borderlands, and as the “Cool” custom voice in Dragon Ball Z: Ultimate Tenkaichi.

Since age 7, Joel was acting in plays at school and church, which led to community theatre, high school theatre and speech tournaments, which somehow turned into a BFA in Acting and Directing from Sam Houston State University. From there, Joel began acting professionally. In 2006, after years of freelance stage work in the Dallas-Fort Worth area, Joel stumbled upon voice acting. And to everyone's surprise, he was a passable ADR director and adaptive screenwriter, and has worked in some capacity on over 80 titles to date.

All three guests will be available in various panels, interview sesions, Q&A sessions, and more. They will be joining numerous announced and yet-to-be-announced guests, including Random aka MegaRan, The Pillowcases, V is for Villains, Level Boys, FanService Renji, Party Monster DJs, DJ Oso, and DJ Jeffito. Convention events include a cosplay masquerade contest, anime screenings, autographs, fan panels, workshops, a formal ball, multiple rave dances, and many many others.

Anime Midwest will be held July 6-8, 2012, at the Wyndham Hotel & Convention Center in Lisle, Illinois, just east of Naperville and about twenty minutes from downtown Chicago. Rooms for the convention can be reserved online at http://animemidwest.com/location for only $99.99 per night. Registration is online for only $30 until June 10th, or $35 at the door for a weekend pass. Online registration can be found at http://animemidwest.com/register
Posted by TW at 12:48 AM