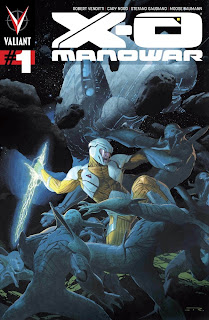 Valiant Entertainment is proud to announce that it has reached an exclusive digital comics distribution agreement with comiXology, the world's largest digital comics platform available on iPhone, iPad, Android, Kindle Fire and the Web with over 60 million comic and graphic novel downloads to date.

Beginning today with the release of the all-new X-O Manowar #1 by New York Times best-selling author Robert Venditti (The Surrogates) and Eisner Award-winning artist Cary Nord (Conan), comiXology will offer same-day as print digital releases for all of Valiant's upcoming titles. Additionally, Valiant's expansive back catalog of classic content will also be exclusively available via comiXology.
"There's tremendous excitement around Valiant's return, and they're bringing with them one of the greatest libraries of characters and stories in comics," said comiXology CEO and co-Founder David Steinberger. "We couldn't be more proud to partner with Valiant in the digital marketplace. We’re sure to see the original Valiant fans energized by making these great comics available across the globe, while also bringing in a whole new generation of readers."
Set for a much anticipated summer 2012 relaunch, Valiant will soon return with four new series, all of which will debut as same-day as print digital releases on comiXology — X-O Manowar #1 on sale today, Harbinger #1 on June 6th, Bloodshot #1 on July 11th, and Archer & Armstrong #1 on August 8th.


Moreover, in conjunction with the today's release of X-O Manowar #1, comiXology is adding the first-ever digital editions of three classic storylines from Valiant's vast archive of best-selling comics to comiXology’s library of more than 20,000 issues:


"For the first time, through comiXology's platform, Valiant Comics will be available anywhere in the world," said Valiant CEO Jason Kothari. "With Valiant's return now in full effect with today's release of X-O Manowar #1, the timing couldn't be better to remind people once again of the incredible characters and stories that made Valiant a household name."
As part of the exclusive agreement, Valiant Entertainment titles will also be available through comiXology’s Digital Retailer Storefront program. This enables retailers to sell Valiant’s digital comics through their own website while comic book fans can purchase digital comics from their local comic store’s digital storefront with a portion of each purchase going directly to the retailer.
Future digital releases on comiXology will delve deeper into the Valiant catalog, and feature classic series including Archer & Armstrong, Rai, Ninjak, Shadowman, Eternal Warrior, and Quantum & Woody.
In the meantime, today fans everywhere can now add all-new Valiant material to their digital comics libraries with X-O Manowar #1, from writer Robert Venditti and artist Cary Nord, available now on the Comics by comiXology platform — available on iPhone, iPad, Android, Kindle Fire and the Web.
Posted by TW at 9:32 PM