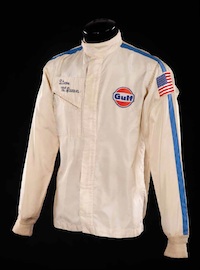 Steve McQueen items from the global hit Le Mans will be in Profiles in History's mega Hollywood auction in July.

Steve McQueen's Gulf racing jacket worn during the production and promotion of Le Mans (left) is a Simpson Nomex fire resistant race jacket with blue lateral stripes down the arms and embroidered Gulf patch on the left chest. “Steve McQueen” is embroidered in cursive script on the right chest with the American flag sewn on the left shoulder. It was worn by McQueen in between scenes and on idle days during Le Mans’ filming in addition to a great amount of the European advertising since executives feared public confusion if McQueen were to wear the screen jacket with the character name “Michael Delaney” on his chest. It was obtained from one of Steve McQueen's mechanics.  In December 2011, Profiles in History sold McQueen’s original hero screen-used Gulf driving suit from  Le Mans for an astounding $960,000. This jacket is estimated to fetch $80,000 – $120,000.

Also included is the Steve McQueen hero screen-worn “Michael Delaney” Team Gulf rain jacket. This is the original Glenoit & Lillja dark blue insulated rain jacket with gray trim featuring embroidered “Team Gulf Sweden” patch on the left chest and “Gulf ” patch on the left shoulder. Much of Le Mans was shot in the rain and McQueen can be seen wearing this jacket both on screen and between takes on the set in numerous publicity photos. It was obtained from the costume supervisor on the film who kept the jacket for the past 40 years and comes with a signed letter of authenticity from him attesting, “this Gulf rain jacket was worn by Steve McQueen in and while making the movie Le Mans.” It is estimated to fetch $80,000 – $120,000.

Other than a fast car, what's more important to racing than time keeping. Up for auction is the “Michael Delaney” hero Heuer Monaco Wristwatch Screen-worn in Le Mans, pictured below. This beautiful Heuer “Monaco” production 1133b (matte blue dial) is now universally known as “The McQueen”. This is the actual wristwatch worn by Steve McQueen during Le Mans production and in related images. In 1970, Jack Heuer himself delivered a variety of his chronograph timepieces to Donald Nunley, prop master on the set of Le Mans in France. From this selection, Steve McQueen himself chose this specific watch to wear as his character “Michael Delaney” during production and in publicity photos. The watch is in exceptional condition and comes with its original manual of operation and notarized letter of authenticity from Le Mans  prop master Donald Nunley.  A remarkable piece of racecar lore and movie history worn by Steve McQueen, the iconic star who embodied the thrill of the sport and glamour of Hollywood.  In 2009 McQueen’s personal Rolex Submariner watch sold at auction for an astounding $234,000.  This Heuer Monaco watch is expected to fetch, $200,000 – $300,000. You can also own Heuer “twin set” stopwatches used during filming. The pair of Heuer stopwatches—Auto-Rallye and Monte Carlo models—are mounted side-by-side on a Heuer chrome backplate and were used by Steve McQueen during the making of the Le Mans. In the film, these stopwatches were used by McQueen to time racecars on the track. The watches come with a notarized letter of authenticity from the previous owner certifying that, “I acquired these stop watches directly from Solar Productions and Donald Nunley the prop master that worked on the film.” The watch also comes with a letter from McQueen’s office, signed by his secretary stating, “…the twin set Heuer that Mr. McQueen used in the film to time the cars will be coming from Mr. Don Nunley.” They are expected to fetch $40,000 – $60,000.

Stay tuned for more announcements in the coming weeks.
Posted by TW at 10:33 PM