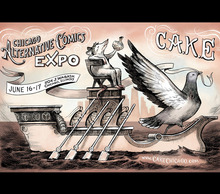 The first ever CAKE – and the first alternative comics expo in Chicago in 16 years – will bring together the comics, art and talent of nearly 200 local, national and international

Comics, prints and artwork will be available for purchase, including debut books from independent publishers such as Koyama Press (Toronto), 2D Cloud (Minneapolis), and Domino Books (Stockholm/NYC) and cartoonists such as Mickey Zacchilli (Providence, RI) and Ted May (St. Louis, MO).

In addition to the diverse list of exhibitors (available at www.cakechicago.com), CAKE presents a full slate of exciting programming. Panels include a comics and animation screening curated by the Eyeworks Animation Festival; a discussion on vulgarity in comics, featuring Ivan Brunetti, Lisa Hanawalt, Onsmith, and Hellen Jo; and a comics and fine art panel sponsored by the Art Institute of Chicago, to name a few.

Beyond expo hours, the weekend promises Chicagoans and visitors many comics-related events throughout the city:

CAKE is a weekend-long celebration of independent comics, inspired by Chicago’s rich legacy as home to many of underground and alternative comics’ most talented artists– past, present and future. Featuring comics for sale, workshops, exhibitions, panel discussions and more, CAKE is dedicated to fostering community and dialogue amongst independent artists, small presses, publishers and readers.

Though CAKE is an independent, not-for-profit, volunteer-run organization, the expo would not be possible without the help of generous donations from comics lovers, as well as Chicago’s independent comics, art, and music communities, Quimby’s Bookstore, the Art Institute of Chicago and Columbia College of Chicago. In order to keep the expo free and open to the public, CAKE is running a fundraising campaign through IndieGoGo until Friday, June 1, 2012 (http://www.indiegogo.com/CakeChicago).