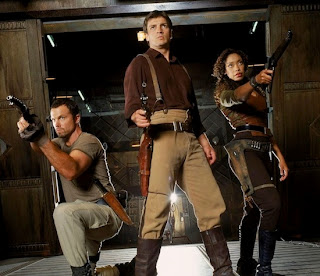 Rumors of a Firefly MMO have once again started seeping through the internet. Blaster reported last week that Multiverse, the company that has been working on a MMO for Browncoats, shut down a couple of weeks ago. However, the Multiverse Foundation, which just started, wants to take over. They've gotten the source code and is working on it now. Besides, the foundation doesn't have the rights to Serenity or the show, so may not be able to release it anyway. And there's been talk of a Firefly MMO for years. In fact, the last the staff here heard about it was in 2007.
Should you not want to wait, there is online Firefly roleplay in Second Life. Our sister publication, the 'Verse Voice, covers much of the RP news, along with some general Second Life and science fiction news. You can see the oldest of the Firefly SL communities here in Washtown (the crappy little town named after Wash the pilot. It also has information of Firefly in SL and the other Firefly and those that just work with the roleplay. You will have to join Second Life to visit, but you can do that for free.
Posted by TW at 6:13 PM