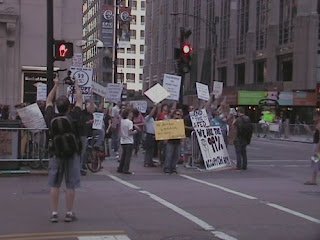 I'd heard a little about the Occupy Wall Street protest a few weeks ago, but hadn't thought too much about it. There's a few reasons for that. One, daily life keeps me busy enough. Two, I thought it would be just another action that I've seen mentioned on Facebook that would fizzle out before long. Finally, I'm actually always iffy about things people get really loudly passionate about. I reserve my passion for my loved ones and my obsession with Firefly.

That changed this past week when the protest in New York and those that had started in other cities finally broke through to the mainstream media. I was still iffy though. Seeing the photos of crowds and seeing the videos of people chanting kept reminding me of the anti-globalization protests in the late 1990s. The same ones that led to riotting in Seattle. Kinda colored my point of view a bit.

There's also the fact that, for the most part, I'm not that left wing. I consider myself a moderate or pragmatic liberal. I have beliefs and principles, but I also see the benefits of compromise and flexibility. I prefer that something works fairly and at least decently. While there are things I won't compromise on, I prefer consensus and quiet. And I just hate to fight. 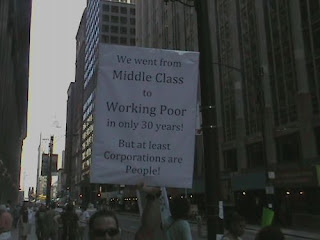 As I read up on the protests, I had to admit very quickly that I was in the same position as the protesters. Up until the recession started, I was happily employed, decently-paid with some savings. I was even able to start considering what I needed to do to buy a home. If we needed something in the house, we bought it. Two years later, after layoffs and lots of struggles, I'm lucky to make just under 60 percent of what I used to. And that's an improvement from just a year ago when I was making 40 of my old pay. It takes two part-time jobs with no health insurance and my savings got used up years ago and I'm still having to file for bankruptcy. Even with cutting back every way possible, we just break even. The list of things we've had to do without or put on hold, including healthcare, is as long as my arm. More than 16 years in media and all I've been able to get are jobs that pay a fraction of what I used to make and I'm glad to have them. 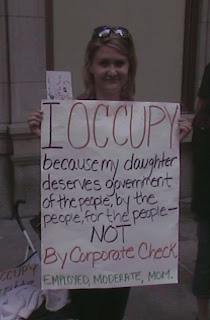 I was also suprised at how much they had grown. Thousands marching in NYC. Protests starting here in Chicago, over in Wisconsin, LA, DC and Columbus. With that in mind I went down to the Loop to see the Occupy Chicago protest first hand.

At first, I was a little underwhelmed. I had no problem finding parking. And while there was a crowd, it was relatively small. I was surprised, but it was also a Saturday afternoon. The Loop almost becomes a ghost town at night and on weekends except for tour busses speeding through and Michigan Ave. I pulled out my camcorder and started taping.

I did see some of the same kind of protesters I've seen for years in Chicago. Far left wing, split between anarchist and socialist. College students who still have idealism. Like I had when I was 19. In 1993. I also heard the chant "The whole world is watching." I think that's been said at every protest in this city since 1968. It must be a law or something to use it. However, those protestors were by no means the majority. I also saw people who would not be out of place at a suburban mall, northside bar, southside neighborhood or Cubs game. It was representative of the city.Cars would honk in support as they passed by. It seemed odd when a $70,000 Mercedes honked as it turned the corner, but I did get a few chills when city busses, tour trolleys and family cars would lay on the horns as they passed by.

I watched from across the street for a while, getting footage, before I made my way into the crowd. I'm not the type to actually be in the middle of something. My preference has long been to be an observer, not participating. But the people were friendly, not pushing for others to participate. And despite what the mainstream press had said, they did have a basic demand: getting unregulated corporate money out of politics and regulation of the financial industry. Yes, there were signs that said "end the fed" and "eat the rich." But there were also signs that basically said "for success, not excess." One woman, whose name I never did get, had a sign that proclaimed she was protesting for her daughter's future, along with being employed, moderate and a mom. She stated the goals better than any news story I've seen anywhere, including the alternative press that has been the loudest speakers. To paraphrase, none of the other issues that people care out can be effectively dealt with until the basic issue, dominance of corporate money and the corruption of the system, is resolved. 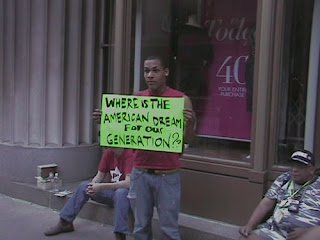 As I left because both my parking meter and camera battery were ending, I noticed that the crowd had grown. All sides of the T-intersection now had protesters, with sizable crowds both in front of the BofA Center and the Chicago Board of Trade. The crowd was almost roaring "Occupy Chicago."

I'm still iffy about being in the protest myself. My default of being the observer is still going strong. But as I drove through the intersection on my way home, I still added my car horn to the cacophony.
Posted by TW at 11:45 PM